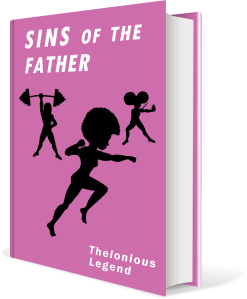 As part of the latest Diverse Book Tours event, the Midwest BSFA blog is excerpting Thelonius Legend‘s middle grade tale Sins of the Father, in which three sisters discover that they have extraordinary powers that could kill them if they don’t find a cure for the side effects. Keeping their powers under wraps all while trying to survive middle school? Good luck, girls! Check it out!

“What did you do? What just happened?” Eve demanded.

“I crashed the energy grid for this quadrant,” Ana said calmly. Stepping outside the guard shack, she slowly looked the building up and down twice through a small scope.

Gwen looked at Eve. Eve shrugged her shoulders and adjusted her rope. “OK, I’ll bite… and why did you crash the energy grid for this quadrant?”

“The building is now being powered by backup generators. But the generators have a limited capacity, so only the floors that are most critical to the business should be on,” Ana explained, as a 3D rendering of the building materialized above her tablet. The rendering contained small human images inside. “The outage will only last seven minutes, but when the power comes back on the cameras will be in an endless loop, so we don’t have to worry about being seen. Now, the lobby security will be checking every floor, so we need to check our five floors as quickly as possible. I already unlocked the doors to the loading dock, so let’s go! Wait…”

Gwen saw that Ana had a concerned look on her face. “What’s wrong?”

“They have a larger janitorial staff than I figured. I count nine individuals in the building, but—”

“But what?” Gwen pressed.

“Heat signature. There is something different, unique, about one of the heat signatures. We might want to rethink this.”

“Fine, Eve! Fine! But I’m only going in if we’re not doing the stupid monster movie thing and splitting up. We check the floors together.”

“Can’t you see something is wrong here? I have a sixth sense about these things, and this doesn’t feel right! So we go in together and stay together or we don’t go in!”

“Cool. And another thing—” Gwen started, before Eve interrupted her.

“Wait! Shouldn’t we say a prayer first or something?”

“Why wouldn’t I be serious?”

“We’re about to break into a building! And you just choked out a security guard. Doesn’t it say in the Bible, ‘Thou shalt not choke out minimum wage workers’?”

“Don’t get an attitude! I’m just saying—a prayer might be nice!”

“You can’t pray before you break into a building! Plus, that guy probably has a wife and kids! Now he’s going to lose his job because he was choked out by a bookworm! I pray that you don’t run into another security guard or janitor!”

“Wait, here, take these. You can hook them on your belt.” Ana gave Eve and Gwen some canisters.

Eve inspected one of the canisters. “What are they?”

Gwen clipped her canisters on her belt. “Anyway, remember if something happens, we go out the windows and not the exits. That’s what the ropes are for. Got it?”

“Can we do this already?” Eve stormed off.

Gwen stood over Ana as Ana slid a card through an electronic door reader.

“What is that card again?” The girls were in a dimly lit hallway. Abstract artwork adorned the walls and the floors were polished marble. Ana was attempting to open two large double doors.

“It’s a skeleton key. It has integrated circuits and a microprocessor that communicates wirelessly with my computer. The first swipe detects the type of cryptography or encryption algorithm, and voila! The second swipe unlocks the door. It works on hotel rooms too!”

“Are you two finished? Can we go in now?” Eve asked, as the door opened. The three sisters entered cautiously. The room had a large lab at the center, surrounded by cubicles. The lab was encased in glass with a biohazard sign on the door. Two large oak desks were directly in front of the lab door.

“This must be it!” Eve exclaimed

“Wait, I thought I heard something?” Gwen whispered.

“You kept saying that on the sixth floor. I’m not falling for it,” Eve replied.

“I keep telling you, this doesn’t feel right. And where are all those janitors?”

The girls froze. Holding her breath, Gwen noted the east and west ends were a wall of windows. The west side was too far away. Plus, they would have to pass an emergency exit. Gwen grabbed her rope and started walking toward the east windows.

“Come on! We have to go!” she whispered to Ana and Eve, who were still frozen. She came back for them. “Ana, lock the doors, and let’s go!”

She started pushing them toward the windows. She stopped when she heard footsteps outside the door they’d just come in. She heard more footsteps coming up the stairwell of the emergency exit. Whoever they were, they’d given up the pretense of being quiet.

Like what you read? Purchase Sins of the Father in paperback or for Kindle here.