How to Spite A Racist Troll: Support Black Dreams

“One of the ways speculative fiction can work against racism and decolonization is to re-imagine our past, altering the power dynamics that we are accustomed to in order to illuminate hidden histories and silenced voices.” 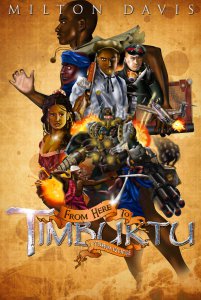 This March, African-American indie author Milton Davis released his long-awaited Steamfunk adventure From Here to Timbuktu. Filled with heroes, heroines and (of course) all things steam, the story is set an alternate 19th century world where the United States shares North America with a nation of liberated slaves called Freedonia, Mali is still a powerful kingdom in West Africa and an ambitious Prussian officer has nefarious motives. It’s a fascinating, imaginative bit of world building that should be welcomed by everyone in the genre. Not so however for racist trolls, who live to crush black dreams.