On Aug. 29, Midwest BSFA held their first Queen City Black Comix Day.  Nine creative artists collected together to talk to attendees about their art, comic genres, artistic techniques and what inspires them. Geeks of varying ages traveled across Cincinnati to the St. Bernard library branch to discuss and share their love of comic books. 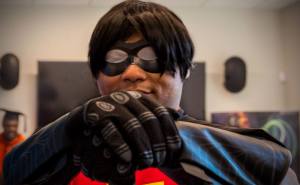 Around 50 to 60 people attended. One middle school boy who happened to be in the library that day was so impressed with the function that he not only gathered his friends but stood outside the library and directed passersby into the event.

That reaction was exactly the response Aiesha Little, the co-founder of Midwest BSFA, was aiming for. Over the course of 2015, the group has held several programs to bring speculative fiction-themed events to the black community. Their Afrofuristic music discussion, sci-fi book club and steampunk party were geared towards adults. This is the group’s first event for the whole family.

“Using the event as an opportunity to reach out to kids and teens who are interested in comics, we’re choosing to show case talented indie creators who are African American and from the same place they grew up,” Little said. “Who knows? A kid who attends this event might find something that inspires him or her for a lifetime!”

Sixteen-year-old Tim Carter of Lincoln Heights received self-publishing advice from Chad Taylor for the comic book he’s been working on for the last few years with his friends. Taylor smiled as he reminisced about the feeling of seeing his first graphic novel in print. “You won’t forget your first one,” Taylor said. “It was exciting.”

Jamilah McDowell and Nikia Prince discussed with an attendee the length of time it would take to create a costume for cosplaying. They talked about the process from choosing a character to creating a pattern to sewing. When asked if a person could just buy the outfit prepackaged both young women shook their heads. “No, you can’t do that,” they said.

Jahzeel Gidron, a self-taught artist, showed off his intricate artwork of various superheroes while Asherah Bealer sold stickers of manga characters she drew:  some original, some cartoon inspired.  Joseph Pledger dressed as his lead character “The Million Dollar Slave” from his comic book series, Ultimate Voyages Through Language and History.

The venue, although small, packed in a lot of people in just a few hours. “We’re so grateful that so many people came to check this event out,” Little said. “We’re looking forward to doing this bigger and better next year!”