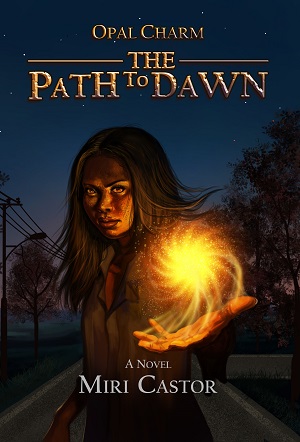 Author Miri Castor gives Midwest BFSA readers an excerpt of her new YA urban fantasy novel Opal Charm: The Path to Dawn! A New York native, she spent many a middle school recess writing fantasy stories, with Opal Charm being one of them. She has written for Black Girl Magic literary magazine and was recently featured as a Spotlight New Author. Castor is currently working on her second novel while finishing her final year of undergrad.

Here lies Jermaine David Charm, seated with God in Heaven. 1990-2007, his tombstone read. Opal turned away from it, sat down on the cold, soft ground, and gazed down the hill, recalling the swarm of black that went up the same hill three years ago.

Opal gripped Josephine’s hand as she led her up the hill. The sun was gleaming in the clear blue sky, yet the zephyrs were bitter and ruthless. Josephine barely spoke to Opal; she was conversing with her sister, Grace, and her young brother, Shareef Charm, who were at her sides. They were behind Sarah, David, his brother Domenico Augustino, his sister Geovana Brivio, Opal and Sarah’s grandmothers from Josephine and David’s sides, and Josephine’s grandfather. Friends of Jermaine, Sonya, and Aaron himself were gathered around the ditch in the ground. They made it to the top, and Josephine almost fell back down seeing the ornate urn that carried Jermaine’s ashes.

Her co-worker caught her in time as Opal released her hand. She cried out and screamed as David rushed over and helped her to her feet, whispering words of solace into her ear. Her family members gathered around her to make sure she was fine. Sarah rolled her eyes and sucked her teeth as she sat down in one of the chairs the funeral home directors had set up for the site. Josephine was escorted to her seat by David and her co-worker, while the rest of the family members and miscellaneous people took their seats. Opal sat in the front next to Sarah, her puffy, bloodshot eyes scrutinizing the ants crawling beside her buckle shoes. She didn’t want to be next to her parents; she wouldn’t have been able to handle being beside them.

Just as the guests were becoming restless from the bitter December air, the priest finally came to the site to say the blessings. He commenced a long prayer that required everyone to hold hands and bow their heads while he blessed the urn with holy water. When it was over, the employees of the funeral directors placed the urn in the six-foot hole that was dug up and handed the guests white roses to toss inside. Opal didn’t budge from her seat, her rose tight in her hands as she watched the rest of her family drop them in the ditch. The small conversations, light-hearted laughter, and quiet murmurs among the family and friends restarted. They were all remembering Jermaine in good spirits, acting as if he had been the greatest person in the universe when he was alive,

“Remember when he stood up to Mr. Cutillo? Jermaine really helped me out in that class.”

“Jermaine was the best artist I knew.”

“He was the coolest guy at Grassfield, and he was the nicest person I met at that school.”

At the same time the workers were refilling the hole, a few of Jermaine’s friends from Grassfield High School rose out of their chairs, saying they’d like to say a couple words about Jermaine. The personal speeches made Opal a little bit cheerier, and the funny stories they included brought weak smiles to Josephine and David’s faces.

The hole was filled, and the tombstone was planted right atop it. David and Josephine kissed the tombstone and caressed it as if it were Jermaine’s face. David, his voice cracking, thanked the guests for coming and invited them to their home for refreshments. The guests quickly left the grave site – the family members said their goodbyes to the tombstone, as well as Jermaine’s school friends – and slowly trekked down the steep slope that was engulfed in blossoms that closed up for winter; Sarah was the first to leave, and she did so with dry eyes.

Opal was holding on to her grandmother’s hand as they went down the hill carefully, and then she remembered she left her rose on the chair. She told her grandmother, Mira Charm, she’d be back, ran up the hill in her long, grey and black ombre dress, and saw a sienna-skinned girl holding the white rose. She was wearing an elegant black dress and shawls with little glitter on it, her hair in a braided bun.

The girl noticed her and lifted the rose. Opal nodded.

“Here,” the girl said, handing Opal the rose and folding her arms. “I’m sorry, I don’t think I’ve met you before. Are you Jermaine’s friend?”

“Thank you,” said Opal, grateful, as she twirled the rose’s stem in her hand. “I’m his sister.”

“I see.” Opal shyly backed away from the fascinated girl and went to place her rose in front of the tombstone. “The wind will blow away that one rose. You should’ve tossed it in, yes?”

She turned for the hill, but the girl made a funny noise that made her halt.

“Could I read your palm for a second?” the girl said.

Opal glanced nervously at the crowd of people leaving the cemetery. Would they have already noticed Opal wasn’t there? Would they care?

Opal shook her head stubbornly, and the girl chuckled. “I’m a friend of Jermaine’s. He was very nice. I’ll miss him a lot.”

Opal wanted to ask if she was his girlfriend, but she had a feeling she wasn’t. Jermaine used to tell her everything, and he always told her about any girls who were bothering him.

“I’ll quickly tell you your future,” his friend said.

Opal reluctantly went to her and gave the girl her hands. The girl bent over a little, humming and rubbing them for about ten seconds, then released them with a gloomy sigh.

The girl frowned deeply; she was clearly strained by something, but then she smiled faintly. The wind kicked up, blowing Opal’s curls out of her face.

“You have a bright future ahead of you,” the girl said as she folded her arms. “But what’s –”

“Opal, come on!” Aaron’s voice was raised from down below. “The limo’s here.”

Opal said a quick goodbye to the fortune teller and hurried down to meet Aaron, who was dressed in a tight tuxedo. She picked up her frilly dress and nearly tripped as she rushed down. She ran down toward her future, bright as the glistening sun.

When Opal started losing feeling in her fingers, she got up and tapped the tombstone. She wondered if Jermaine had heard the lady tell her future, and if he believed it. Jermaine wasn’t the type of person to believe fortune tellers and horoscopes. He liked to see things for how they were, so Opal didn’t believe in the palm reader either.

She gazed at the light grey clouds blanketing the sun. How far did she have to go to reach the bright future?

For more about Castor, visit http://miricastor.tumblr.com/. You can purchase her book on Amazon in paperback or for the Kindle.