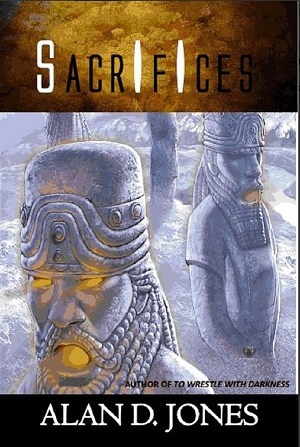 Here’s an excerpt of indie writer Alan Jones’ epic fantasy novel Sacrifices, the second in his trilogy, To Wrestle With Darkness. In it, Cil, Deborah, Ruth and Sarah are four sisters descended from angels (and humans) who must contest the forces of darkness that are intent on ending all of creation.

One by one, four black horses, exploded out of nothingness into the white pristine snowfall of a Scandinavian winter night. Each horse ran hard through the woods of fresh powder. Atop each horse, rode a daughter of Hosea draped in black. Each rider rode with such purpose that no words were needed. Each knew her destination. On the way, they encountered a time walker dressed in white by the name of Akina. Cil pulled on the reins of her steed and her sisters followed suit.

“Akina, all is as expected?” she asked.

Akina pulled back her fur lined hood to reply, “Yes, Auntie, all is as expected. But you know that. Don’t you?”

Cil said nothing but smiled before she kicked her heels into her horse and rode off into the darkness. One by one, each of her sisters proceeded past Akina. First was

Deborah, who had, as Akina would later describe, a wide-eyed, overly-excited look on her face. It was almost a bloodlust. Next came Ruth Ann, with a thousand miles away stare on her face. Bringing up the rear was Sarah, with her ever-present sunglasses firmly in place. She rode past Akina flashing her trademark irrepressible smile. Sarah’s opponents hated that smile and longed to wipe it off her face. The sisters followed Cil through the woods and towards the castle on the northern bay. They rode hard and fast through the woods as a winter’s full moon illuminated their path.

As the sisters broke through the tree line, a castle and the wall that surrounded it were plainly in sight. They rode toward the guard tower along the outer wall. Nordic soldiers lined the top of the wall in a heightened state of readiness. As the sisters approached, a gate in the wall swung open and they passed through on their shiny black horses. Aunt Cil led them up the central corridor toward the castle beyond.

Residents in the courtyard gasped as the four hooded riders proceeded, escorted by several guards on horseback. The ladies quickly dismounted in front of the castle and walked briskly towards the large wooden front doors. One of the guards barked out a command and once again a set of doors swung open before the women this time opening into a grand hall. The king and his court were sitting in their assigned places at the other end of the hall. It was clear that the Aunties were expected.

The members of the court were adorned in their finest coats and pelts. A feast for four was laid out on the great dining table, but the sisters paid it no mind. It was an offering of sorts, but Cil and her sisters had no time for such things. They stood before the court and removed their hoods. This action froze the crowd more than the weather= outside ever could. The sight of the four black women standing shoulder to shoulder left their mouths agape.

Deborah leaned over to Ruth and whispered, “They’re looking at our hair.”

Cil motioned for Deborah to step forward. Deborah did so and began to speak to the king and his court in their native tongue. Deborah had the gift of speaking in the tongue of many languages. She could even speak languages that she’d never heard before. So, she translated between the parties.

“King Helwig, Queen Helwig, and members of the royal court as our herald undoubtedly communicated to you, we are here to rid your realm of the terror currently approaching your gates.”

King Helwig stood up, “We saw what your herald can do but what can you do that would warrant us putting our faith in you to resolve this matter?” He pointed at the Aunties as he made this last point.

Cil nodded to Sarah. She removed her shades which immediately revealed her glowing eyes. Then, she gazed upon a large urn of water and unleashed a red hot beam from those eyes that split the urn in half spilling the water it contained onto the stone floor.

Next, Ruth Ann stepped forward. She raised her hands, and in a single scooping motion projected a blue shell which scooped the remains of the broken and still smoldering urn into the air. The sphere hovered in the air spinning slightly before launching upwards bursting through the ceiling and into the night sky. The entire court could see the blue ball accelerate towards the great beyond and out of sight.

Then, when all eyes landed Deborah, she simply vanished. From the spot on the floor where she had stood, a spring sprung up spouting water thirty feet into the air.

The geyser began to rage and quickly filled the hall with water. Suddenly, water began to flow into the hall from everywhere. Water flowed from every opening including the windows, the cracks in the walls, and the new hole in the ceiling. Members of the court scurried up the king’s landing and to the throne to escape the rising waters. Just as her audience began to panic, the water disappeared and Deborah reappeared right where she had been when the phenomena began as though nothing happened.

Finally, Cil raised her staff but before she could demonstrate anything, the king motioned towards her vigorously shaking his head. There was little need for Deborah to translate.

Deborah glanced towards Cil and then said to the king, “About our fee…”