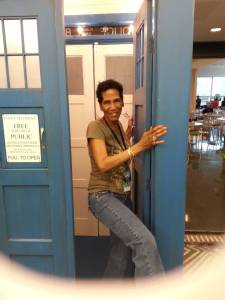 Indie author Valjeanne Jeffers Skyped in to participate in our cyberfunk panel at Pandoracon last month. Midwest BSFA recently talked to her about her nerdom, her writing career, and operating in  predominately-white, predominately-male genres.

Midwest BSFA: Tell us about your “blerd” background.
Jeffers: I’ve always been a blerd. I read authors such as Richard Wright and James Baldwin as a child; both my parents were English professors, so reading Africa American literature was required in my household. I also read YA fiction, and comic books, and drew pictures of mermaids. I was always the odd little black at school, and in my neighborhood.

Midwest BSFA: Who were your favorite writers/authors growing up?
Jeffers: My favorite authors were Richard Wright, James Baldwin, James Weldon Johnson. I was also a big fan Carolyn Keene (the Nancy Drew Mysteries) and a ton of other YA paranormal writers whose names I’ve forgotten, as well as Donald Goines and (believe it or not) Richard Beck. Later, in my youth I would discover Zora Neale Hurston, and much later I would discover Octavia Butler, Charles Saunders and Tananarive Due.

Midwest BSFA: How did you get started writing? Did you always want to write?
Jeffers: I first started writing around the age of 9 or 10. In middle school, I won awards for creative writing. But I took a very long hiatus, and didn’t rediscover it until I was in my 40s. I believe I have novels stored inside me from all those years! At present, I’m up to 10 books (two are series: my Immortal series and my Mona Livelong: Paranormal Detective series) and six short stories with no end in sight.

Midwest BSFA: What’s the difference between steampunk and steamfunk?
Jeffers: In the beginning, one of the biggest complaints that authors of color had about steampunk is that they were missing from steampunk worlds. And so steamfunk was created, and stories of steampunk/steamfunk which were also stories created out of the Black experience – Afrofuturism and tales from the African Diaspora were written. You also have Native American, Latina, Asian steampunk/steamfunk authors.

Midwest BSFA: Did you always want to publish independently?
Jeffers: No, not always. I first decided to publish independently when I realized my novels would gather dust while I continued to try to move past the gatekeepers of traditional publishing. Now, I wouldn’t have it any other way. I love the freedom of being an indie author! Mind you, I’ve had stories published in anthologies. But in my heart, I will always be an indie author.

Midwest BSFA: Why is it important to have people of color represented in steampunk/steamfunk narratives?
Jeffers: I’d like to quote myself from an interview I gave several years ago for PurpleMag. What I said then, still rings true today: In the 21st century there are very still few characters like us, and out of this small pool many are post-modern “Step-and Fetchits” (stereotypes). This is why speculative fiction is so important. This genre helps us to see outside reality, to say: what if? It helps us to imagine and create spectacular, wondrous realms, step back and find the beauty and wisdom there, and then transform our own space.

We need to dream, and we need our writers to help us to dream. Even if – especially if – these dreams are of fantastic, imaginary creatures and happenings. We need this because dreaming can be an escape. One should never underestimate the power of escape. Imagine a child living in squalor, and escaping into pages of a novel. Or a slave reading by lamplight and envisioning her freedom. Or a man working as a sharecropper, and at sunset telling his story with harmonica. We all need to escape, at least sometimes, into the worlds of those who dream like us, who understand us; who look like us. To paraphrase B.B. King, we need authors who get us where we live. Second of all dreaming helps us to change. If you can dream you can move yourself and your corner of the world forward.

Midwest BSFA: Describe your writing process? Do you write with an outcome in mind? Or do you outline stories/plot every point of action?
Jeffers: When I first begin a story (and this is especially true of my novels) I often don’t know how the story will end. As I continue to write, tale – ending and all – will take shape in my mind. But then I sometimes have complete stories that jump into my head. I dig both creative processes. Both are part of the journey.

Midwest BSFA: Why do you like the idea of using African history as part of steampunk/steamfunk narratives?
Jeffers: I like being able to bring elements from African mythology into my narratives – elements from Voudon, for example. They are so exciting to write about. I also get a chance to explore my own history – to connect with my ancestors – while I’m creating.

Midwest BSFA: What do you think people of color should know if they want to get into steampunk?
Jeffers: There is no electricity in steampunk worlds. It is as though the Industrial Revolution never took place. Other than that, they are only limited by their imagination.

Midwest BSFA: How do you define cyberfunk? Why did you feel it was necessary?
Jeffers: I define it as I would cyberpunk: A technologically developed society, yet one lacking basic morality, and/or basic resources. Yet in cyberfunk, the author is writing from his own space, his or her own community. This is as necessary, as it is in any other subgenre of speculative fiction. It’s important for us as authors of color to have our own voice, create our own narratives.

Midwest BSFA: What’s it like to be a black writer creating speculative fiction in spaces where people are only used to hearing about white writers?
Jeffers: It’s never bothered me. This is because almost from day one I have been surrounded by a loving community of writers. First, by the Carolina African American Writer’s Collective (CAAWC),  later by Black Science Fiction Society.com and The State of Black Science Fiction Society.

Midwest BSFA: What’s the difference between cyberfunk/cyberpunk and Afrofuturism, in your opinion?
Jeffers: There is no difference, in my opinion. Afrofuturism encircles them both.

Midwest BSFA: What are some of your favorite cyberpunk/cyberfunk stories and why?
Jeffers: One of my favorites stories is Welcome to Liberty (Howard Night) because it’s a futuristic/cyberfunk/detective story. Howard is an excellent writer – one of my favorite authors.

Midwest BSFA: As a woman writing in a male-dominated genre, what tips do you have for female authors?
Jeffers: Don’t give up! Don’t let anyone tell you, you don’t have what it takes. Make your journey and create your worlds. There are readers waiting for you.

Valjeanne Jeffers, the co-owner of Q&V Affordable Editing, is the author of 10 books. Her fiction has been published in Pembroke Magazine, Steamfunk!, Griots: A Sword and Soul Anthology, Genesis Science Fiction Magazine, Genesis: A Black Science Fiction Anthology Volumes I and II, PurpleMag numbers 7, 8 and 9, LuneWing, 31 Days of Steamy Mocha, Griots II: Sisters of the Spear, and Possibilities. Her novel, The Switch II: Clockwork, was nominated for the best ebook novella of 2013 by the eFestival of Words. Her short story, “Awakening,” was also published as a podcast by Far Fetched Fables. To see excerpts of her novels, go to www.vjeffersandqveal.com.

One thought on “Interview with Author Valjeanne Jeffers”