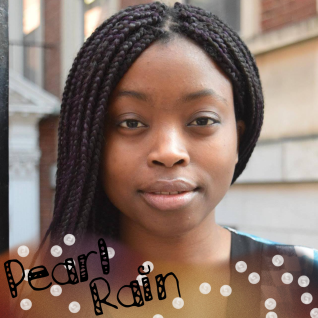 Midwest BSFA recently talked to filmmaker and Harvard grad Jumai Yusuf about her short film Pearl Rain, which will be featured at MECCACon International Film Festival in September and October.

Midwest BSFA: Tell us about yourself.
Yusuf: I’m a 22-year-old from Ashland, Mass., who was born in Nigeria. I left Nigeria when I was nearing 2 years old, and lived in Barbados and Connecticut before landing in Massachusetts suburbia. I work at a startup in Boston called the Journal of Medical Insight (JOMI), filming surgeries.

Midwest BSFA: How did you get into filmmaking?
Yusuf: I started doing theater in middle school, acting and helping out backstage in school productions, and I loved it! When I entered college, I decided to major in neurobiology, but minor in Dramatic Arts to keep that passion alive. I became super involved in student theater, and even started an student organization called Science Theater at Harvard College, to try and combine my two interests! I took a film class in sophomore spring, where we each had to direct, write, and edit a short film. This was my introduction to the film world and I started to fall in love! I spent the whole of junior year as the director of a webseries called Absent, run by the student organization Ivory Tower. That year was basically my crash course film school, and by the end of the year, I knew I wanted to pursue directing film as a career!

Midwest BSFA: What’s the first film you remember being taken with/enthralled by?
Yusuf: In one of my high school Spanish classes, the teacher showed us El Laberinto del Fauno (or Pan’s Labyrinth) as part of a series of foreign films. I was absolutely blown away. It was magical yet dark and violent. I couldn’t believe we had watched it in school. Images from the film stuck in my mind for years, and I’ve rewatched it multiple times. When I was developing Pearl Rain, I turned to Pan’s Labyrinth for inspiration.

Midwest BSFA: In a nutshell, what’s Pearl Rain about?
Yusuf: Morayo, a spiritual Black woman, is stuck in an emotionally abusive relationship. When she meets a kindred soul who can appreciate her black girl magic, she finally finds the strength to free herself. It’s based on West African mythology and European fairytale combine in this magical realism short film where fantastical elements serve as a metaphor for self-worth and the value of true love.

Midwest BSFA: How did you come up with the concept for Pearl Rain?
Yusuf: After making a short science fiction film called lili[s], I wanted to tackle the fantasy genre. Importantly, I wanted to tell an Afrocentric story because this perspective is often not reflected in mainstream genre films. I read anthologies of European fairytales and African mythology searching for stories that resonated with me. In a book of newly discovered Eastern European fairytales, I came across “Pearl Tears,” the tale of a girl who cried pearls and laughed roses. In The Hero with an African Face by Clyde W. Ford, I read the Eastern African myth of Miseke, a child whose laughter turned into precious beads. And in the depths of the campus library, I found multiple books on the Yoruba Orishas, a polytheistic traditional religion practiced in West Africa and the African diaspora. It has also become part of the Yoruba culture, so even those who do not practice are familiar with some stories and songs. My family is Yoruba, so I was also able to talk with my parents to learn a bit more about the Orishas. The tales of the Orishas are a treasure trove of rich African lore, rivaling the breadth of Greek mythology. Out of the numerous gods and goddesses I was particularly drawn to Oya, the female warrior goddess of lightning, chaos and change. As one story goes, Oya’s husband Ogun, the god of iron, neglected and mistreated her, which gave Shango, the god of thunder, the opportunity to win her heart. In this story of Oya I saw a heroine for women seeking to change their life circumstances and leave abusive relationships. So I enlisted the help of my friend, a playwright, to adapt this ancient myth into a modern, magical realism film. The result is Pearl Rain, a story of emotional abuse that uses fantastical elements as a metaphor for self-worth and the value of true love.

Midwest BSFA: So Pearl Rain is a love story? What do you think love stories (of all types) convey about humanity that other genres can’t/don’t?
Yusuf: Pearl Rain focuses on where love goes wrong, i.e. in unhealthy relationships. Too many woman go through abusive relationships like Morayo’s, and when the abuse is emotional instead of physical it can be easier for one to try and rationalize it or ignore it. This film is my attempt to create a character that may serve as an inspiration for other women to change their lives.

Midwest BSFA: Where can people check out other projects have you worked on?
Yusuf: You can check out my portfolio at https://www.jumaiyusuf.com/portfolio-1/. The sci-fi webseries Absent and my sci-fi short film lili[s] are available online. While making Pearl Rain, I also made a super short film called Play Date (details on my website at https://www.jumaiyusuf.com/playdate).

Midwest BSFA: What does the medium of film help you convey that other mediums can’t?
Yusuf: One of the reasons I switched over from theater to film is that film is a very accessible art form. As a digital medium, it can easily be shown all around the world and at a low cost. This accessibility is really important to me because I want my work to be able to affect people, no matter where they are or what their socioeconomic status is.

Midwest BSFA: There seems to be this explosion of narratives (in various forms – film, book, graphic novel, etc.) that focusing on incorporating African characters. Is there a chance of over-saturation or do you think people who look like us are so hungry for it that they’ll never get tired of these stories?
Yusuf: Movies and the larger media can contribute to harmful stereotypes about marginalized groups of people. And for some people, movies are the only place they see people who do not look like them. So as a filmmaker, I see it is part of my responsibility to showcase well-rounded, POC characters. That’s why I think it is a great thing that this (relatively small) “explosion of narratives” around POC characters and African characters, is occurring. Daniel Kaluuya calls the upcoming Black Panther movie an “African blockbuster.” That is super exciting! I hope Black Panther is a huge box office success, and prompts Hollywood producers to invest more in African stories. We’re already starting to see it: Fox 2000 acquired the rights to Children of Blood and Bone, the first of a YA fantasy trilogy based in African culture, written by young female Nigerian author Tomi Adeyemi (a fellow Harvard alum!). This gives me so much hope for the future of Afrocentric stories!

Midwest BSFA: Is there anything else you want our readers to know?
Yusuf: Although our crowdfunding campaign is over, we are still trying to reach 500 followers in order to unlock the Filmmaker Giftbox and a distribution deal through Seed & Spark partners such as Netflix, Hulu and iTunes. Follow our Seed & Spark campaign at https://www.seedandspark.com/fund/pearl-rain#updates.