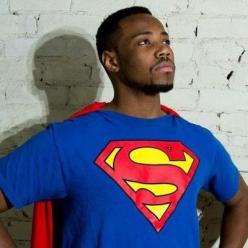 We recently caught up with Jermaine Dickerson, illustrator, designer and former co-host of the BLKBOARD podcast, to talk about what he’s been up to since the success of his inaugural Hero Nation-Ypsilanti event last fall.

Midwest BSFA: What have you been up to since Hero Nation-Ypslanti?
Dickerson: Well, since the con, I’ve been doing my best to exercise self-care. After pouring so much of myself into something like I did with Hero Nation, I needed sometime to readjust. After I took some time off, I started working on client projects while planning for other Hero Nation events. Trying to find a balance between being a self-employed illustrator and graphic designer with managing Hero Nation is extremely difficult.

Midwest BSFA: Do you plan on doing the event again this year?
Dickerson: Hero Nation will happen again in September 2019. I thought pushing it back another year would give me more time to pour into my own personal projects and to gather more resources to ensure that next year’s event is even better. I spent so much of my own money last year and that can’t happen again. So looking at other funding avenues like grants is on my radar. And although I’ve had great success with crowdfunding, it’s certainly not the easiest way to obtain funding.

Another one of my main objectives is to turn Hero Nation into a non-profit. This will open a lot of doors including allowing Hero Nation to eventually expand to other cities. But I think, for now, the con will remain our main event and will stay in Ypsilanti. Meanwhile, I’m brainstorming other event and program ideas that would help expand our mission in other areas of interest – like video gaming.

Our first preliminary event of this year is our upcoming Black Panther youth screening and I couldn’t be more excited. Hero Nation will partner with the Ypsilanti High School to take over 100 youth to attend this screening. We also plan to hand out really cool goodie bags full of donated items from our sponsors like Lion Forge and cosplayer Sistah Geek. I made it a point to make sure that at least most of the items featured Black characters or where created or owned by Black creators. I felt this was an important touch because Black Panther, for many of the youth in attendance, may be the catalyst that sparks their imaginations. And with many of these teens preparing for college, this film might inspire their careers choices. So I wanted to provide them with tools to guide their aspirations; I wanted them to realize that the conversation about Black representation doesn’t end after the credits role and that they have the power to tell their own stories.

Midwest BSFA: Sweet! So I follow you on Twitter and I’m always learning new things, thanks to you. 🙂 I saw you tweet about queer representation in the superhero genre. Did you think it would spark so much vitriol?
Dickerson: I had an idea that it would, simply because I was speaking a truth that a lot of people could relate to. We want more queer representation in the superhero genre and beyond. It’s important to be reminded that representation doesn’t stop at cisheternormative stories – even if those stores feature Black or other characters of color. There’s always room for growth because the human experience is so vastly diverse and much of the content we consume focuses on a mere facet of this experience…one that’s mostly white, male, abled-bodied and cisheteronormative.

Midwest BSFA: Do you feel like there are any good intersectional queer stories in comics right now? If so, what are they?
Dickerson: To be honest, it’s been a little while since I’ve read comics consistently. I’ve been so busy. But I’ve made it a goal for this year to start reading more. Maybe ask me in a few months and I’ll have an actual answer for you.

Midwest BSFA: Another Twitter discussion you started was #BlackBoysEmbrace. What sparked it?
Dickerson: I remember stumbling across the picture of Ryan Coogler and Michael B. Jordan while browsing Twitter and seeing it attached in an article that noted how people were disgusted by it. And by people I’m referring to cisheteronormative Black people. The picture depicts Ryan placing a gentle hand on the back of Michael’s head. It’s a friendly gesture and doesn’t suggest anything beyond the platonic relationship these men have. Even if it had sexual or romantic implications, that shouldn’t matter either. The problem that these people had with this picture is that they believed that it somehow “emasculated” Black men and was yet another attempt to “feminize” Black men, and ruin the Black patriarchy.

Of course, I was annoyed by this. And I thought about how this kind of thinking is deeply rooted in the fabric of Black culture; where Black men aren’t allowed to express varied levels of intimacy – even as friends – without being stigmatized. Much of the critique is rooted in transphobia, homophobia and misogynoir. So saying that it’s ok for Black men to be intimate either as friends or as lovers is a radical notion to a lot of people because it’s such a departure from what they’re familiar with. This is even common in the Black gay male community; gay Black men sometimes perpetuate cisheteronormativy by projecting their insecurities – sometimes violently – on feminine Black gay men.

After speaking about these frustrations on Twitter and saying that Black men should be OK with being intimate, Twitter user, @gianorama, suggested that he would take pictures with his male friends to help dismantle the stigma. Then I thought it would be cool if we turned it into a movement. That’s how #BlackBoysEmbrace came about.

Midwest BSFA: Did you expect people to respond to the hashtag the way that they did?
Dickerson: I honestly had no idea what to expect. I mean, of course, I knew some people were going to hate it – which some did. But I was very pleased to see that it moved some people so much that it brought them to tears. I hope it continues to grow and that Black men of all kinds can find their own voice in this movement.

Midwest BSFA: Why do you think it’s so difficult for straight black people to mind their own damn business when it comes to other black people’s sexuality?
Dickerson: It’s strange, really. Many claim to be repulsed by the idea of sex between two members of the same sex and yet it’s always the center of the critique when homosexuality comes up. It’s almost as if they read it as homoSEXuality. But yes, these people shouldn’t definitely stay in their damn lanes.

I know these are cliché answers, but it’s really that simple for me.

Midwest BSFA: Do you have any other projects coming up soon that you can share?
Dickerson: I’m currently serving as an illustrator on my first children’s book called Over In Motown. It’s both exciting and scary. I’m working with the author, Debbie Taylor, who’s a phenomenal woman. I also have another special project that’ll jump start later this year called Hero Power. Its mission is similar to Hero Nation’s but it’s also very, very different. I can’t say much about it right now, but I think people are going to love it.