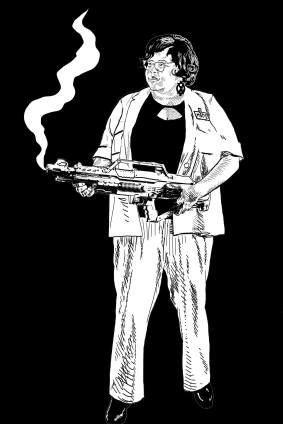 During the extremely long break we took from working on this blog last year and earlier this year, we were up to lots of things, including moderating a graphic novel panel at Books by the Banks and throwing a The Wiz-themed roller skating party for Halloween. One of us even served as a model for a comic book character.  MeSseD revolves around Lilliput, a Filipina sewer worker who fights monsters underground while trying to keep the sewers clear. Late last year, our co-founder Aiesha was asked to be the character model for Fat Mucket, a badass Amanda Waller type who’s the manager of operations at the sewer district where Lilliput works. Dylan Speeg (the comic’s illustrator) took a bunch of reference photos of her, which he’s using to draw the scenes the Fat Mucket appears in in the comic’s third season, which drops later this year. When she asked how she should dress for the shoot, Jay Kalagayan (the writer/creator) said to wear “office clothes.” Would Fat Mucket give the girls a wide leg trouser and a peplum top with a hint of boob window while lettin’ the choppa spray? YES, SHE WOULD! If you haven’t heard of the comic, you can check out  seasons 1 and 2 now at www.messedcomics.com.